I always meant to improve my sewing efficiency by sewing in multiples and what better time to do this than sewing underwear?  This was my first project for 2018.  Not shown here is my first pair, which were sewn using Simplicity 8436...I like the idea of a lace back, but these did not have nearly enough coverage for me.  I also own the Evie La Luve Frankie pattern, which has a variation with a lace back, but my plaid pair made from this pattern do not fit me so well, so I decided to draft my own.

I started with a pattern for a bikini brief traced from a RTW pair that I like.  The website "Pattern School" no longer exists, but I used the technique I learnt there to alter the pattern for a centre back seam for a closer fit, and to enable the back to be cut from stretch lace. 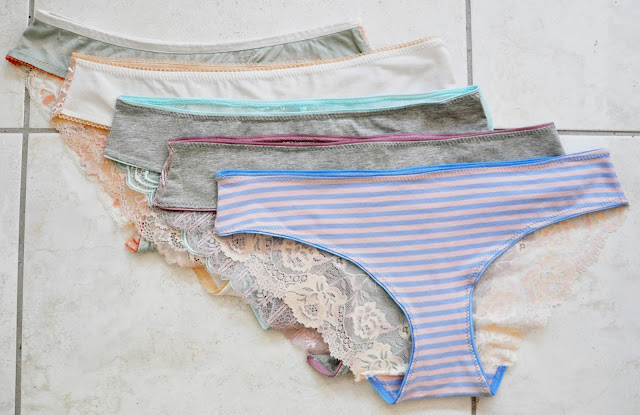 This is my favourite pair. 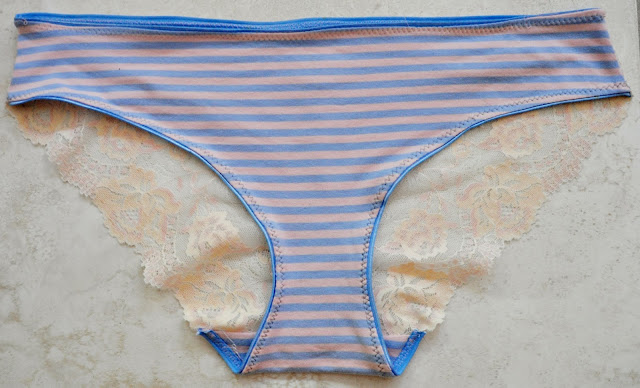 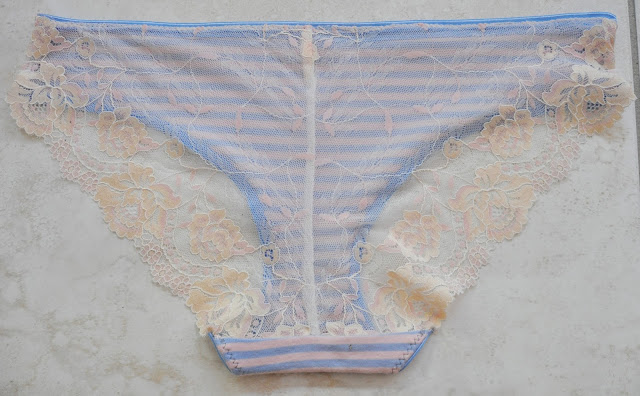 The cotton front makes them comfy enough for everyday wear. 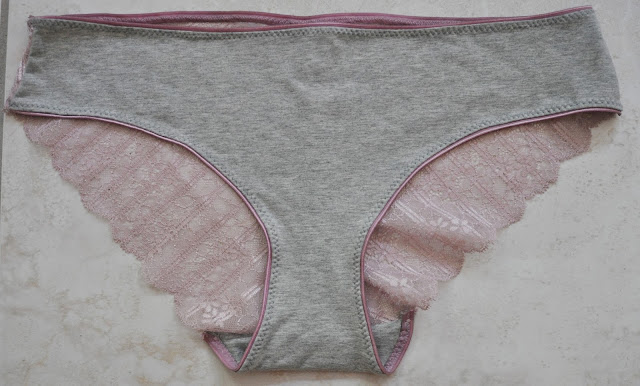 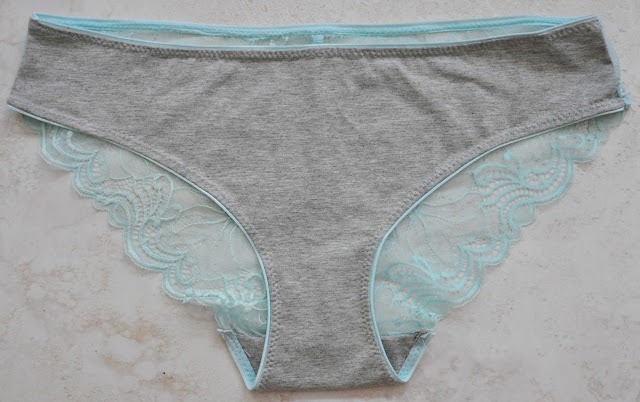 I have a large box of lingerie sewing supplies.  Until now I have been restricted in sewing it up because I was always wanting to sewing matching bras and knickers, and it is tricky to get all the right fabrics in the right weights and stretchiness to go together.  This year I have decided to liberate myself from the matchy-matchy.  This means more fun for sewing, and less time to get dressed. 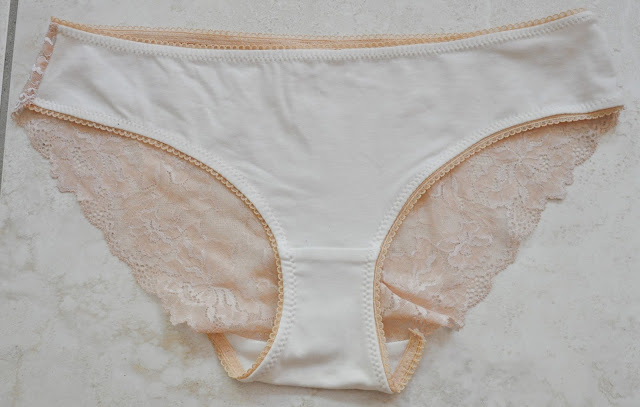 This is my first pair, sewn from remnants.  The front is a silk jersey.  I forgot to photograph the back to show the cut-out at the upper back that results from using a narrower lace.  It makes for a cute feature, but is the reason my the top edge is finished with fold-over elastic instead of regular lingerie elastic. 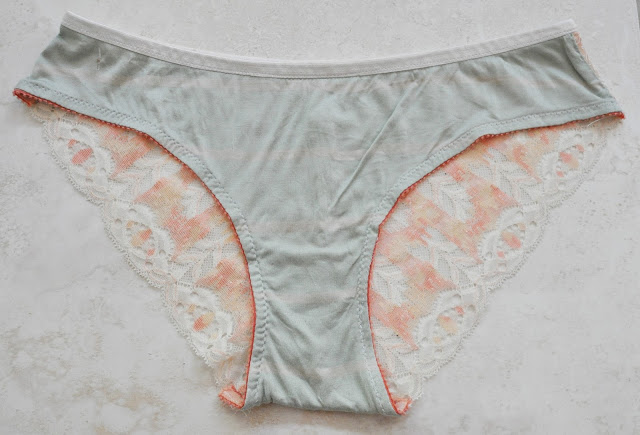 I'm really happy with this pattern and will be using it many more times.  I did tweak it several times over these iterations, with the final pattern probably being about 1/2 size bigger than my starting pattern.  Now that I have been wearing these for a while, I would make one last tweak, by cutting the leg curve in a smidge higher.

A couple of people asked how I created the pattern piece for the back, so I have edited this post with a few extra photos.

This is my starting back pattern piece.  I have marked the side seam, waist, leg opening, crotch and CB, as it is really easy to rotate the pattern and cut or sew it the wrong way. 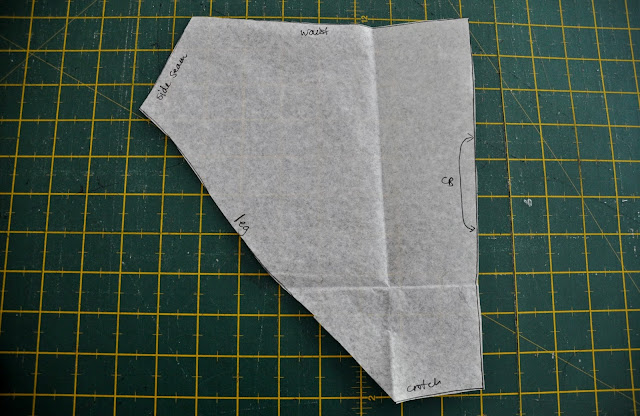 Make several slashes from the leg opening to the CB. 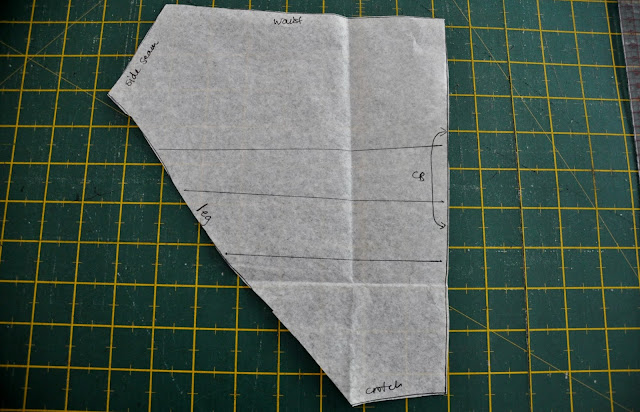 Overlap each slash at the CB.  Depending on the pattern you start with, the total overlap could be up to 6 cm.  Mine was less than that. 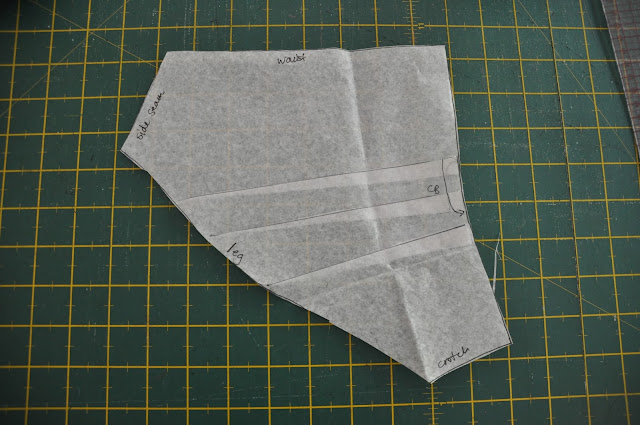 Now you need to add on a seam allowance at the CB.  If you are cutting the pattern out of lace with the scallop edge on the leg-line, you can straighten the leg-line and remove the elastic allowance on the back leg-line. 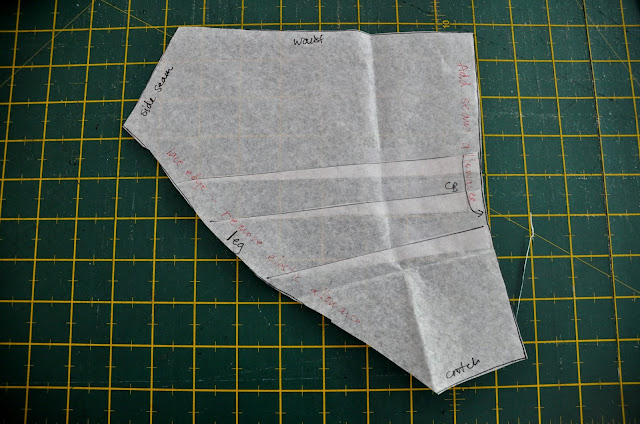 I'd love to know what you do to the pattern to give it a back seam and more shaping. And I love all the lace undies! I have some quite wide lace, maybe I should play round with my tnt undies pattern.

Me, too! I would love to learn the process of the center back seam for a better fit. Could you share? These undies are lovely, and you are smart to batch sew them.

Hi Tropical Threads, I have edited the above post to show how I changed my back piece. I hope this is useful for you and you get to sew up some of your lace.

Hi beckster, I have modified my post to show how I add the CB seam. Happy sewing!