I'm moving house.  This has forced me to clean up my sewing space and address my growing stash.  Scraps stash as well as fabric stash.  As I was cleaning up, I considered each scrap to decide if it was worth adding to the bursting scraps box.  Too good to throw, too small keep...such a dilemma.  Sometimes, it seemed the only way forward was to sew those scraps into garments RIGHT AWAY!  (Lucky I put quite a few hours aside to clean up the sewing stuff).  Here are the results.

First up, metallic jersey that had fallen behind my cutting bench almost a year ago.  These were scraps from a Donna Karan dress, so as you can imagine, they were all odd triangular shapes. 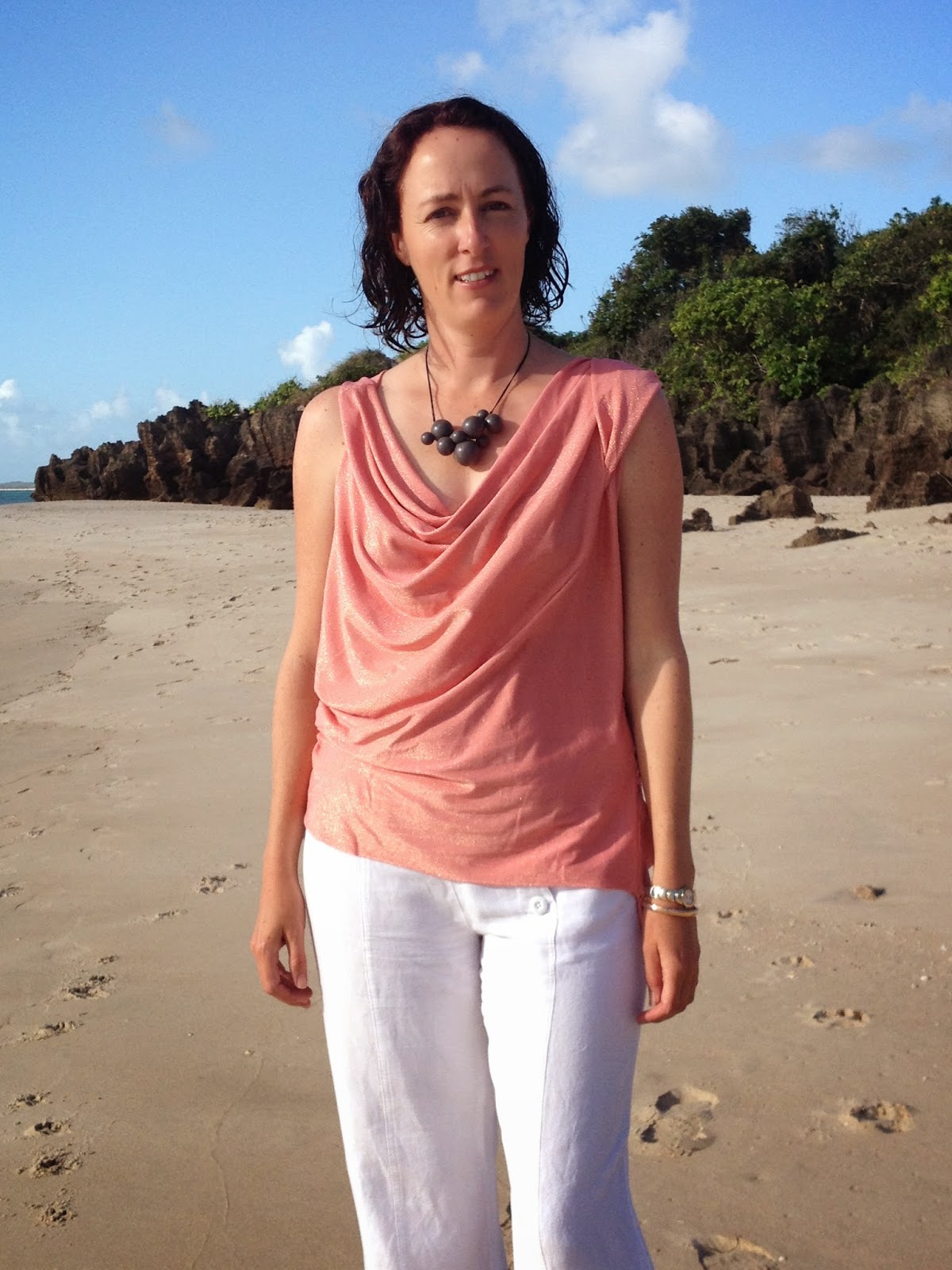 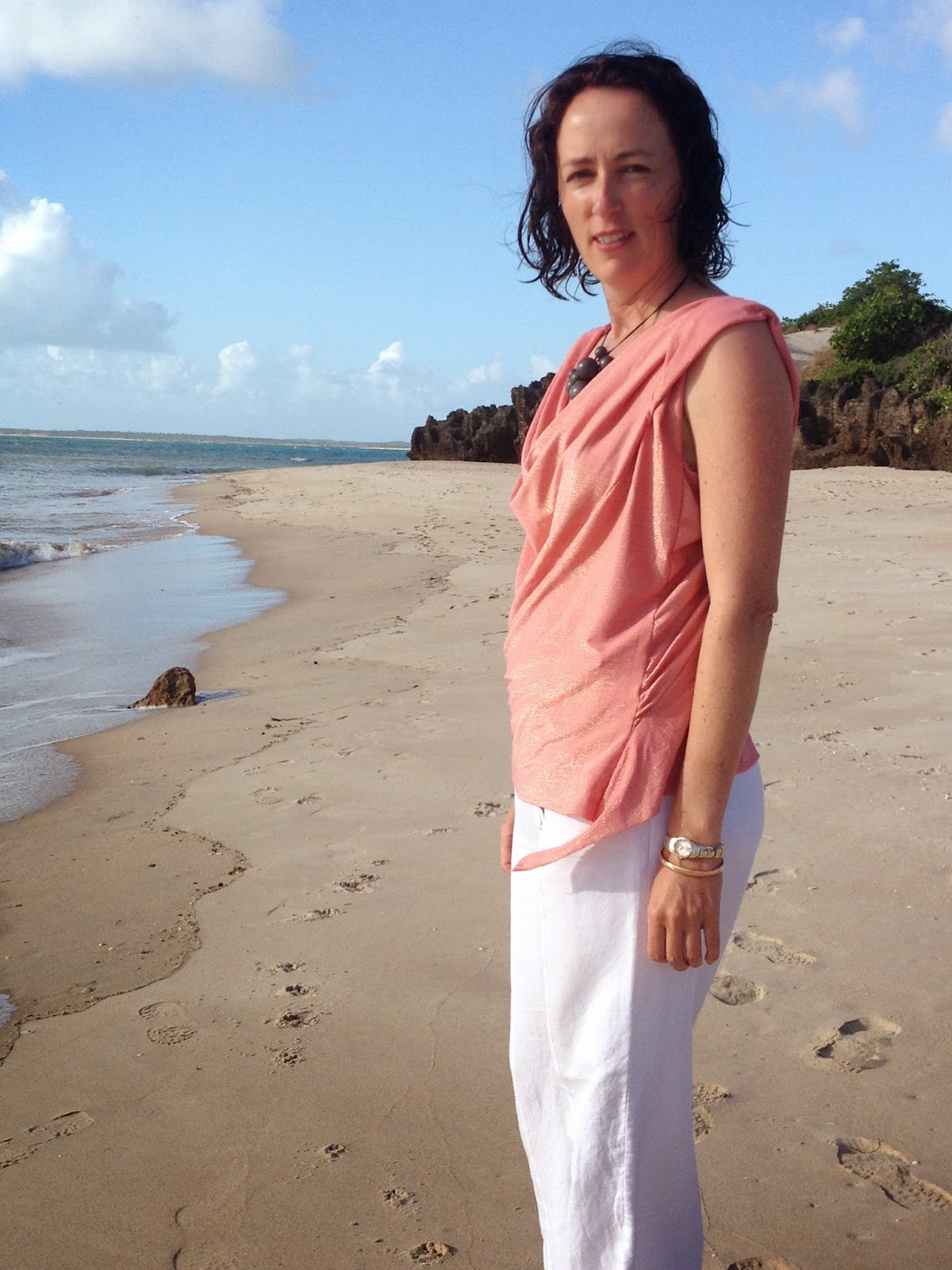 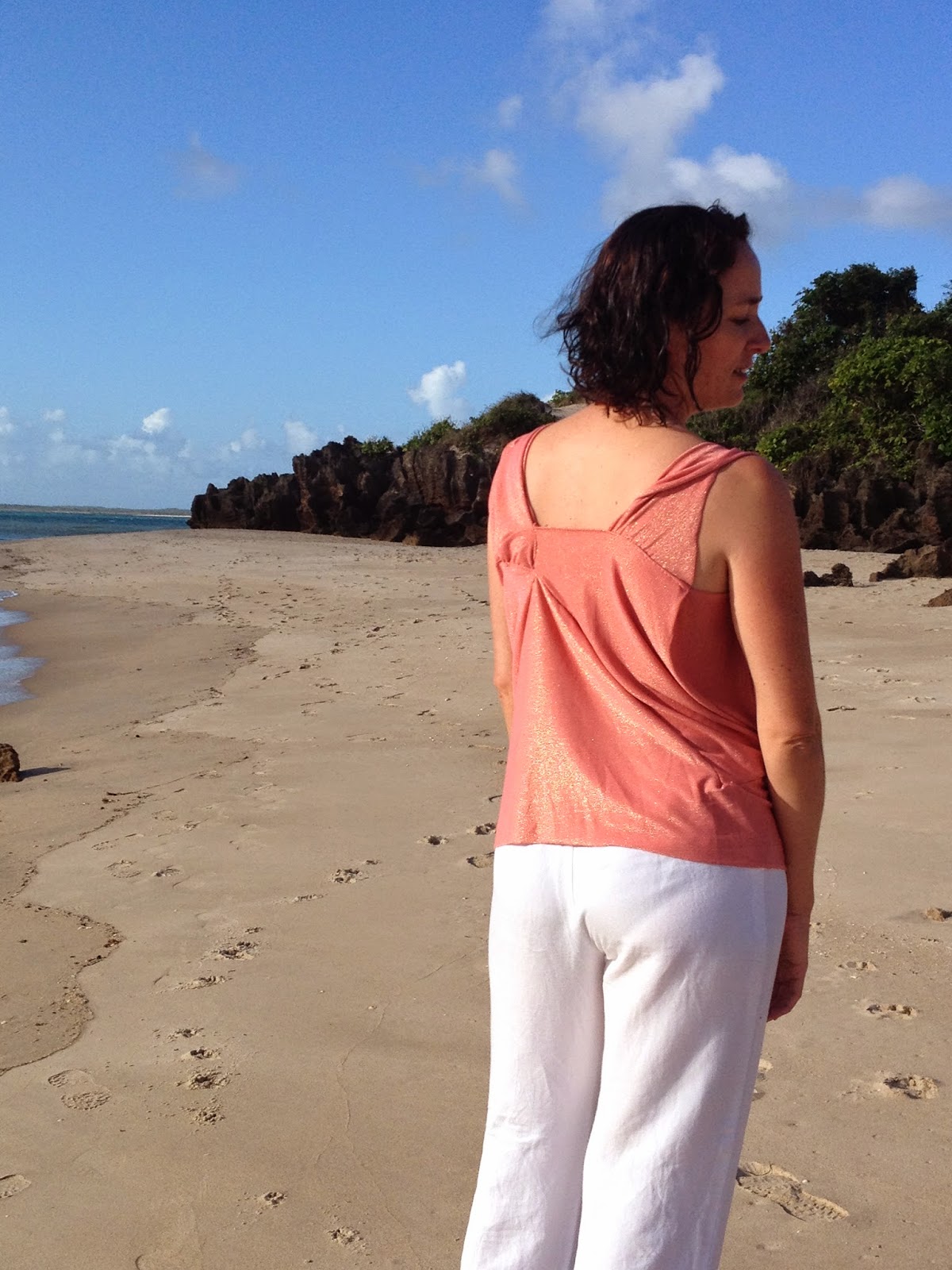 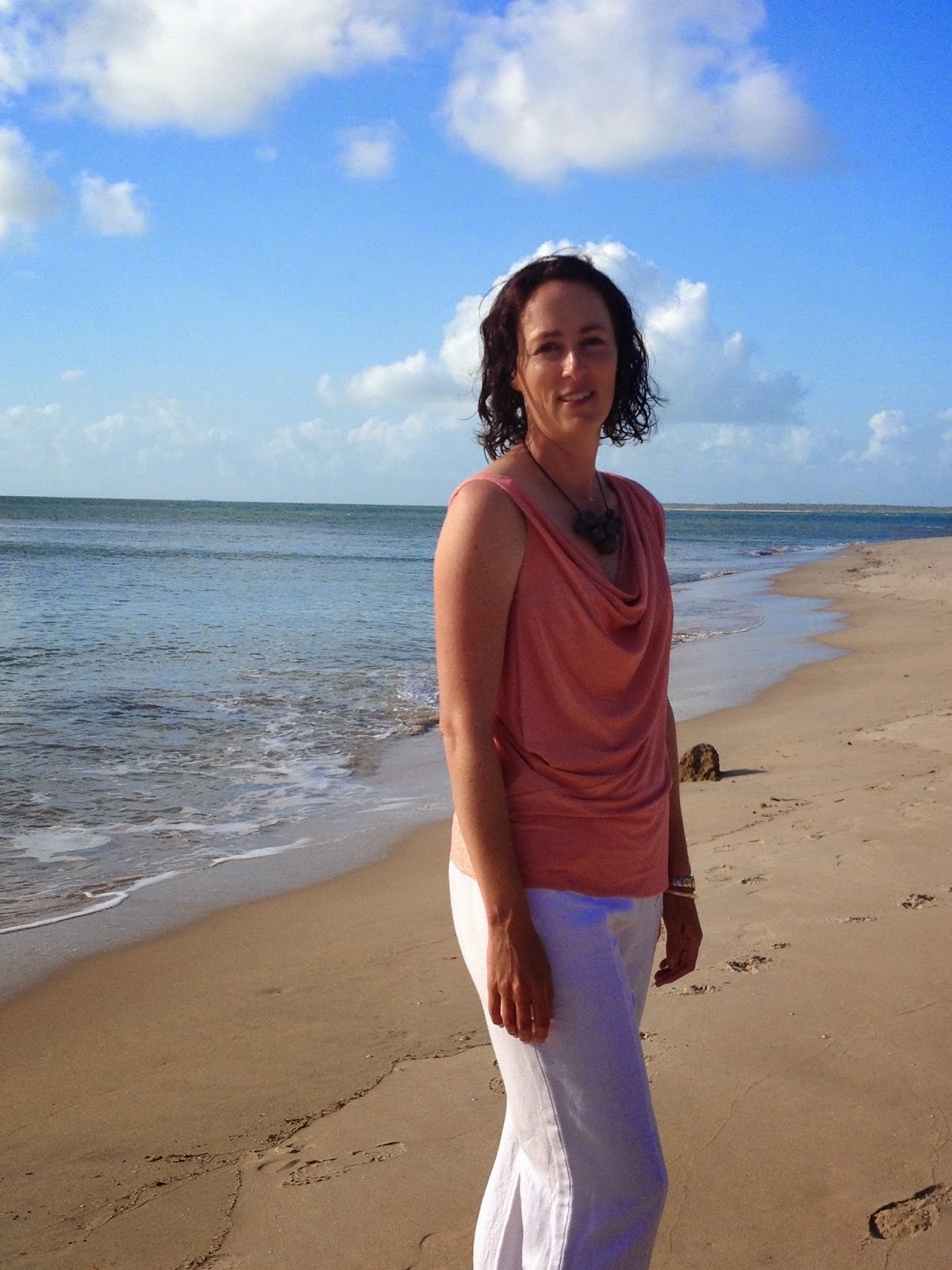 I just draped them, first on my body, then on my body double and basted bits together and pulled them apart and back together again until I was happy with the result. 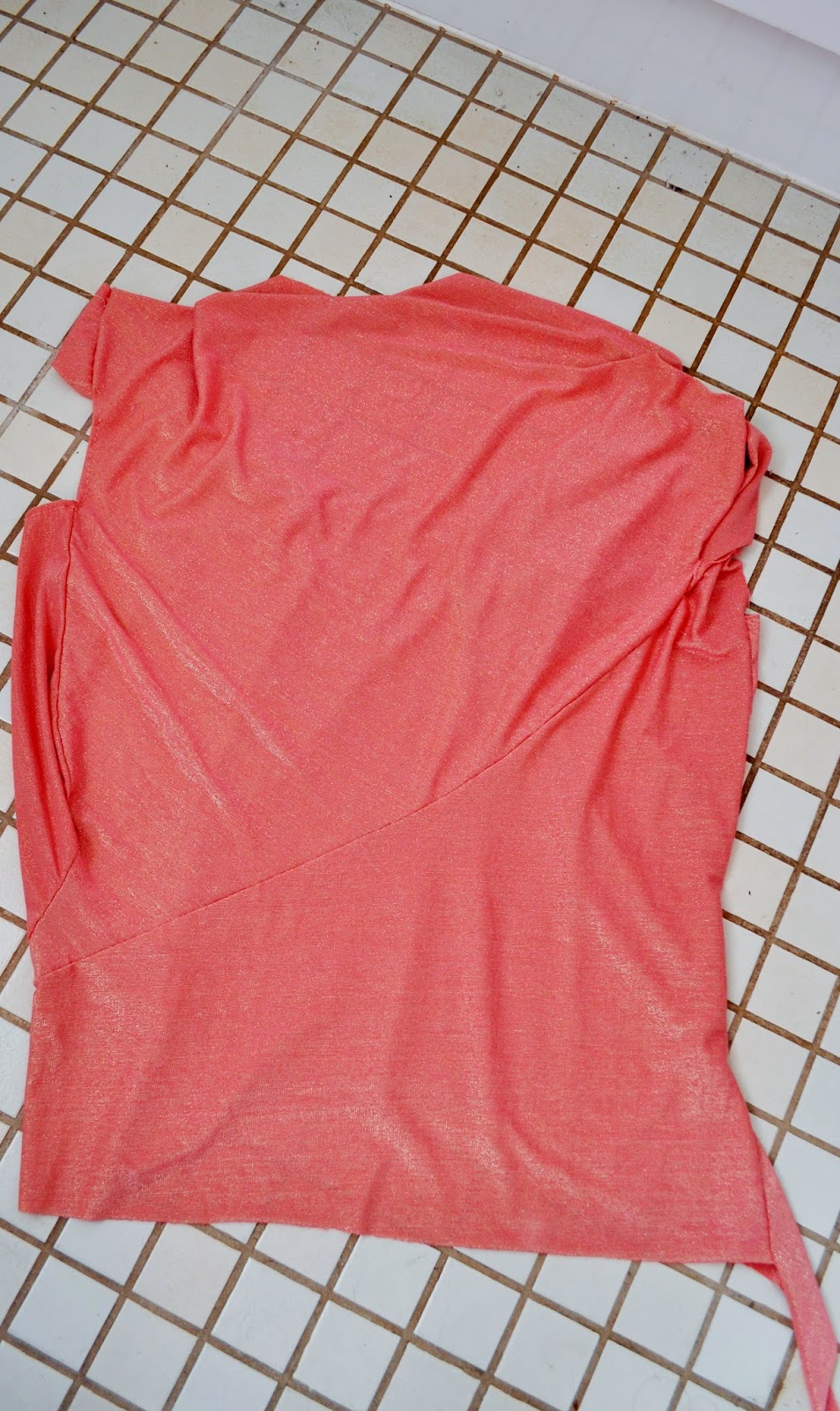 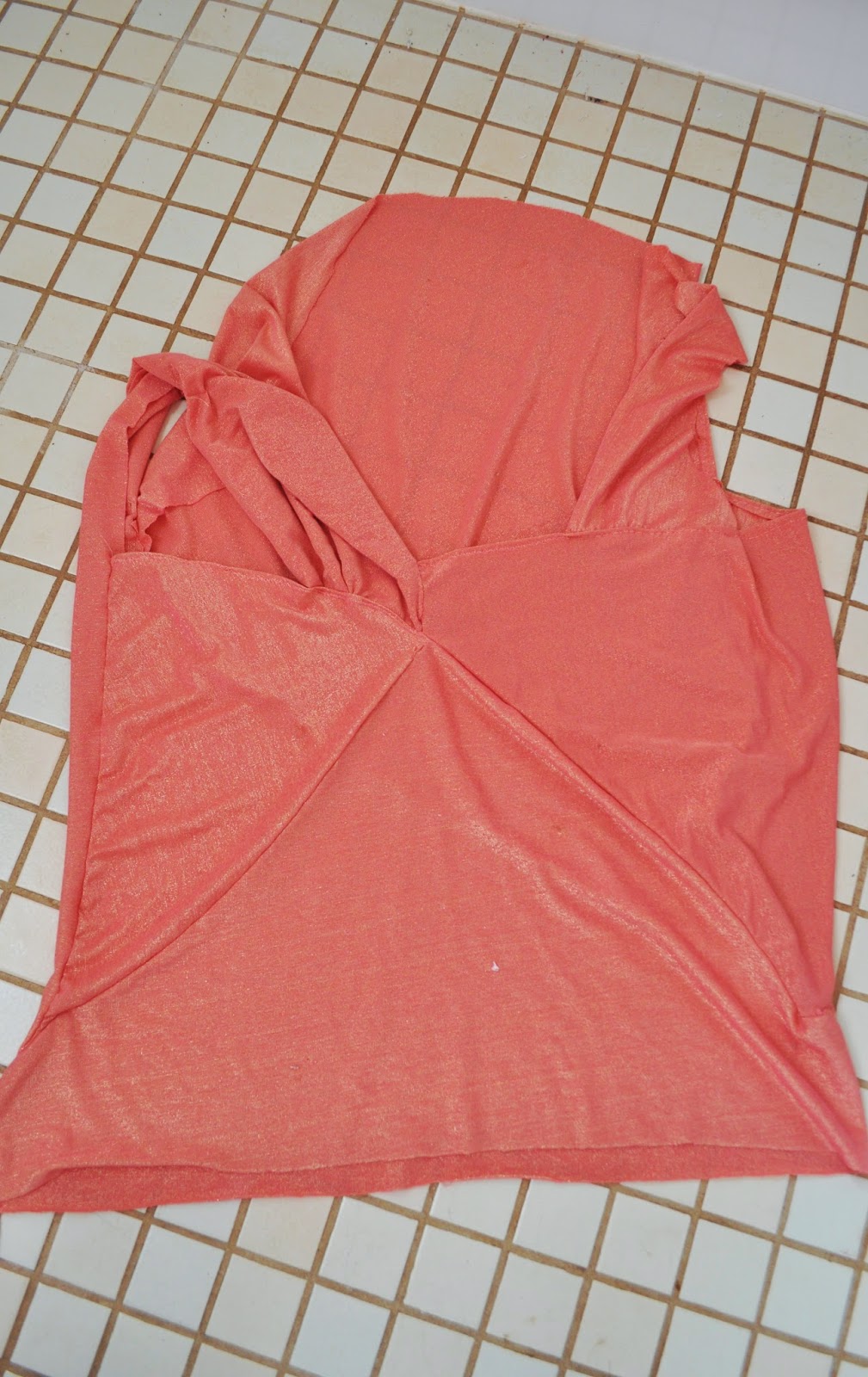 Afterwards, I realised that I had basically sewn a tube...maybe if I had realised that earlier the whole thing would have been a bit easier and I might have got a closer fit (my body double is bigger than me these days).  Then again, maybe not.

I wore this top to farewell sundowners on the beach.

Next up, a floaty, bohemian sort of top, made by stitching various scraps together.  Funnily enough, none of these fabric has appeared on my blog earlier.  Some scraps are from my sister.  Others are from unblogged dresses for my daughter.  The lace is left from a bag I made a friend out of a dress that belonged to her grandmother.  One piece of silk is from a top I made before I started blogging.  The last bit is from an unblogged dress that I made 2 years ago and have never worn. 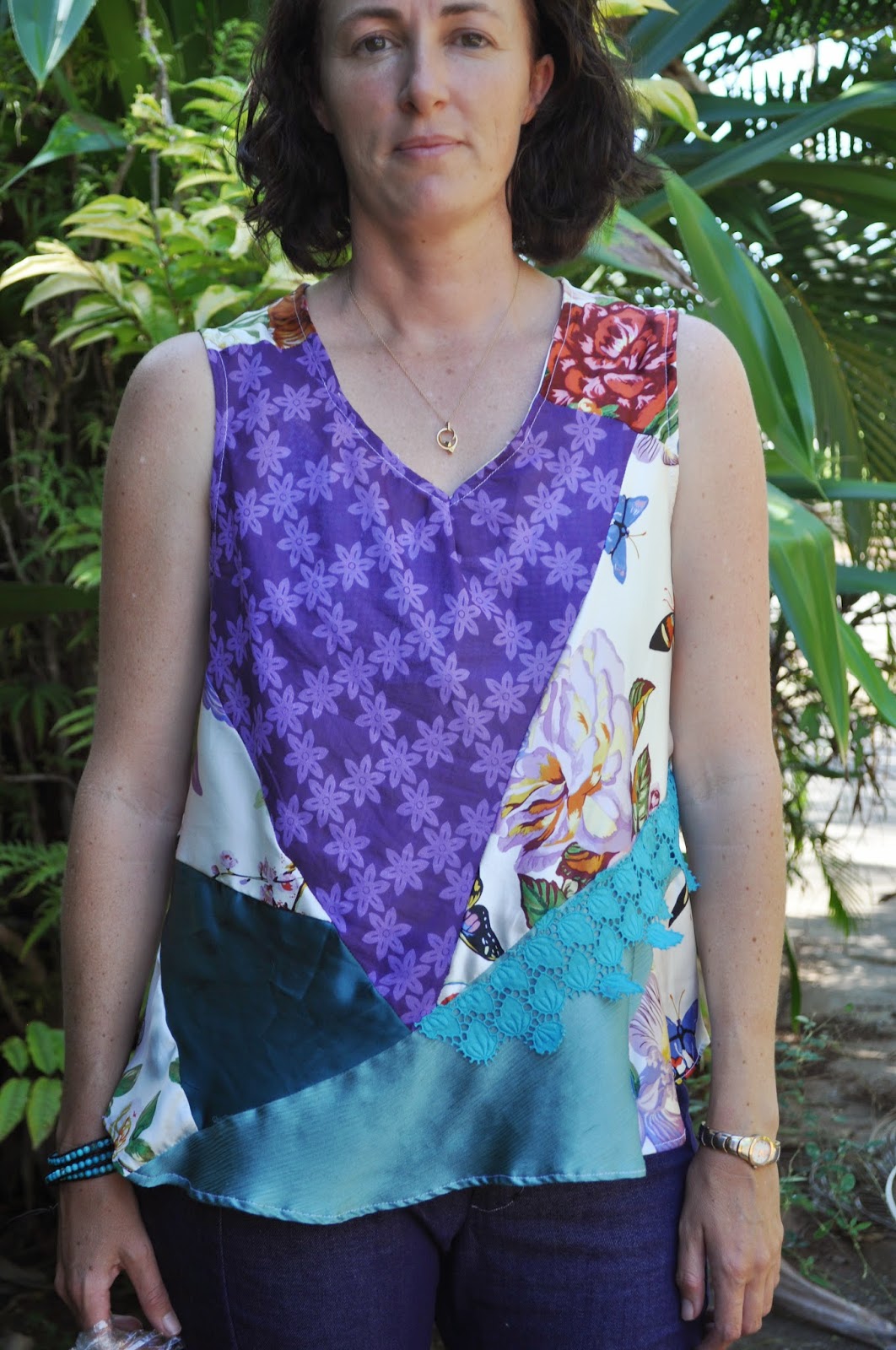 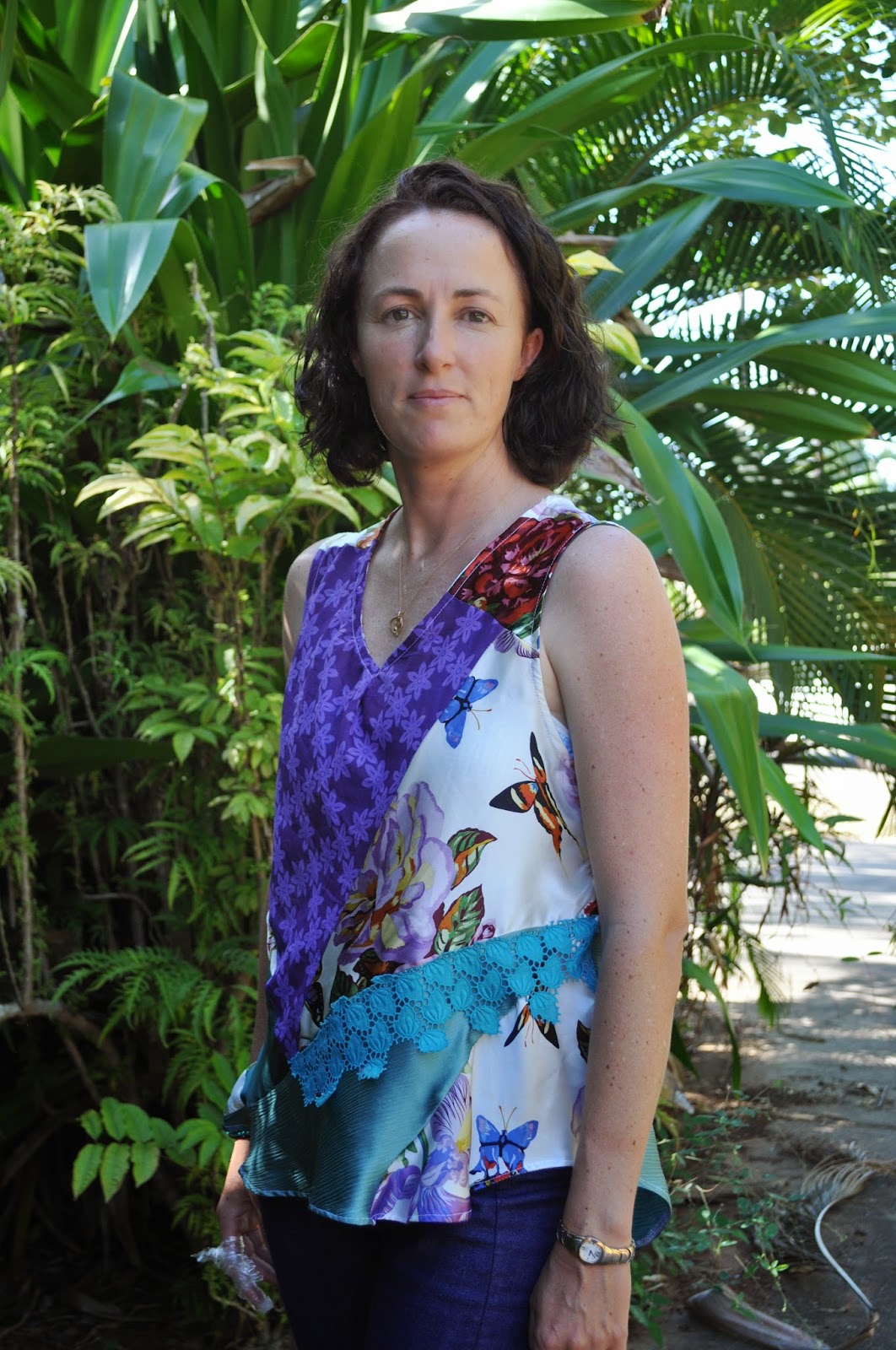 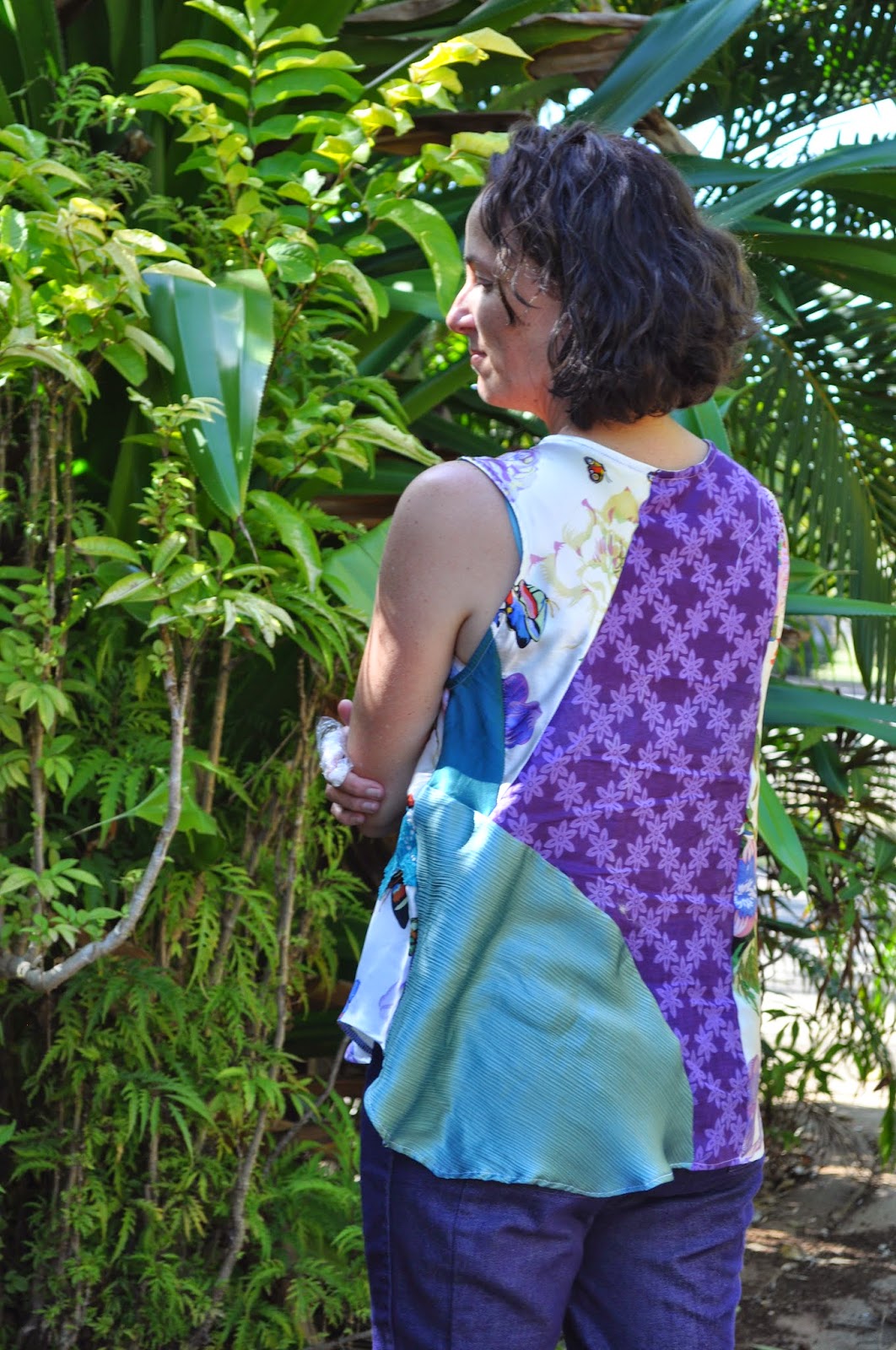 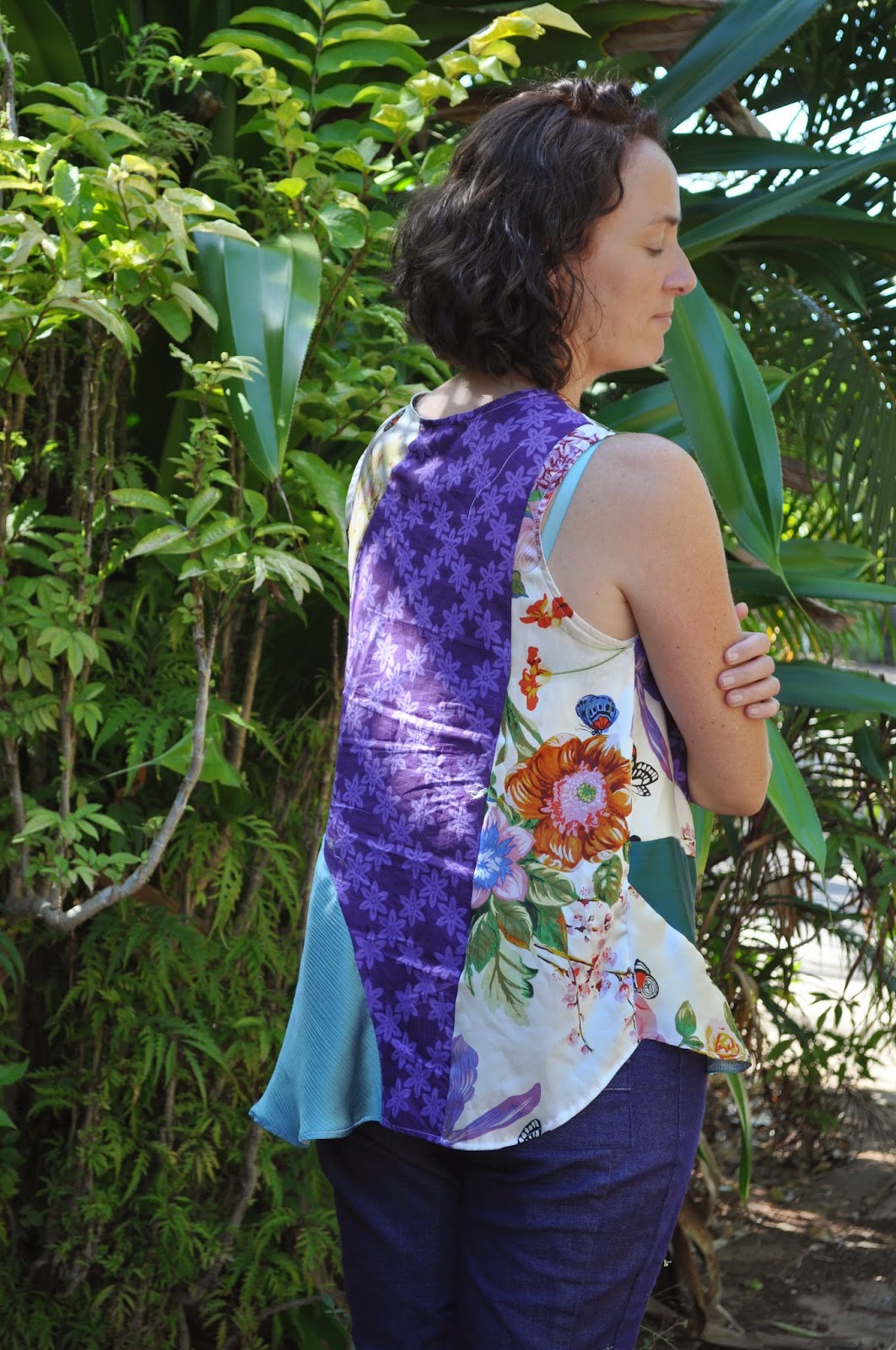 I didn't worry about grainlines, so the hang is all a bit wonky, which only adds to the floatiness of it all.  I didn't have access to my tank patterns (I have sent a few sewing supplies on ahead, as I don't know how long our stuff will be in storage), so this was a bit fit-as-you-go and some last minute tucks were added.  I love the result.

Lastly & least, knickers made from supplex scraps.  I used a self drafted pattern, which I printed out several years ago and is a bit big for me now, so I pulled in the elastic tighter than normal. 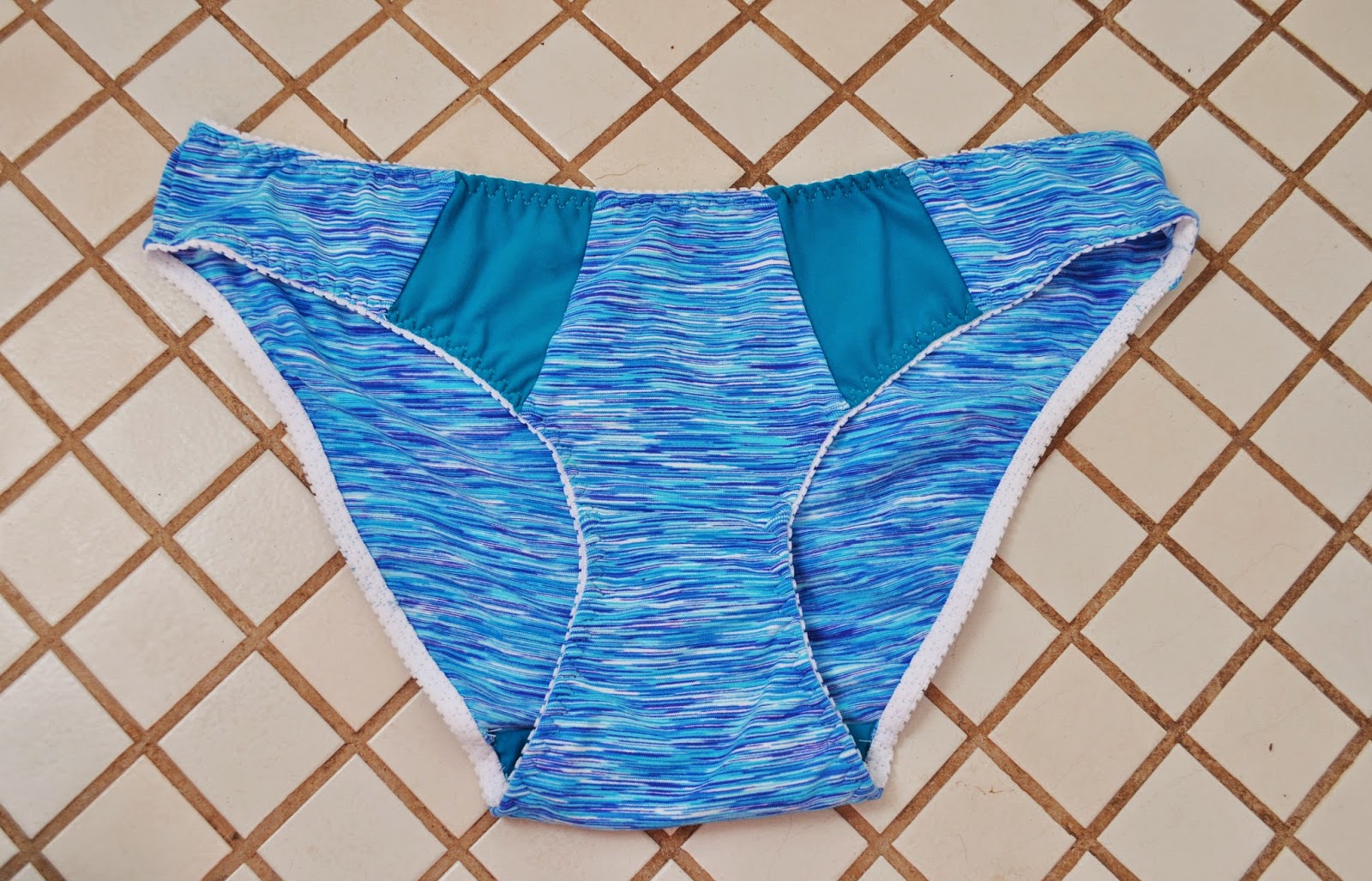 I love the metallic jersey top, it's gorgeous! Are you leaving the coast? I'll miss your beach photos!

Both gorgeous. What a great idea too. Who doesn't have (way) too many scraps that are too good to throw away. Moving again... what a drag packing is (for me anyway).. going far?

My favorite is the patchwork top. What a great use for all the precious scraps we just can't part with.

I'd been wondering if you would be moving on soon. Well that answers that question. If you're going through Darwin on your way to your new home, definitely look me up - a comment on my blog will get me. It would be lovely to meet you irl :-)
The second one looks like the kind of top you can get on Etsy and spend even into triple-figures for. I love it, to be honest. I love the way differing grainlines affect the drape.
And your way of dealing with scraps, to sew them up immediatelty, gave me a good chuckle :-D

Draped! That is so awesome. I love that you just went for it. The scrap top is also great. You've given me some inspiration today!

I am impressed with your scrap busting skills! I love that scrappy bohemian top. Super cool.

Love the salmon pink draped T! Most interesting details & silhouette. Looks high end designer RTW! I think it's got the right amount of drapy ease. A closer fit might not look as good. Great work.

I wish I had the imagination to do this! They look great.

Good use of the scraps - it is the eternal problem for all of us! I've just chucked out bags and bags of little scraps, donated larger pieces and only kept one small bag of my most favourite left over bits of fabric, I was absolutely drowning in them! But something drastic like moving house forces you to deal with it